Furniture from VS for the Thomas Mann House in California 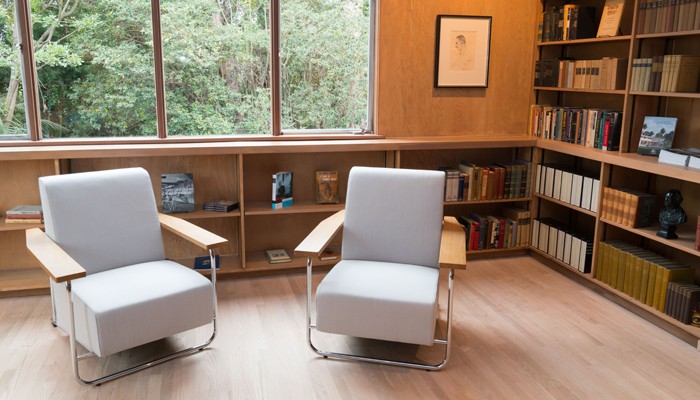 1550 San Remo Drive, Pacific Palisades, California. It was at this address that the author Thomas Mann lived with his family from 1942 to 1951. Here, in exile, he wrote, among other things, the majority of his radio addresses, “Deutsche Hörer!”, which were broadcast into Germany by the BBC.

In 2016, the German state bought the villa for 13 million euros to prevent it from being demolished. The property was then subsequently renovated at a cost of 5 million euros. On 18th June 2018, German President Frank-Walter Steinmeier opened the Thomas Mann House as a German State Residence for intellectuals from the worlds of culture, politics, the media and science.

“The house was so much my own,” wrote Mann in his diaries when talking about the villa. The building was designed by Julius Ralph Davidson, an architect of the International Style, and represented Mann’s new start in California. Mann entrusted the internal furnishings to his friend from Berlin Paul Huldschinsky who, according to architecture critic Heinrich Wefin, ensured “a dignified bourgeois ambiance” and, consequently, continuity.

While, from the outside, the renovated villa looks just as it did when Thomas Mann lived there, the internal furnishings have not been restored true to the originals. Under the leadership of the Berlin-based company LenzWerk Holding, some of the most highly respected representatives of contemporary German and international furniture and creative design worked together on the project. The interior finishing work was financed by the Berthold Leibinger Foundation. It was important for both the financial backer and the planners to maintain the open feel of the building interior, while simultaneously retaining the inspirations of the designers who worked on the original project – such as Richard Neutra, Kem Weber or Marcel Breuer.

As a result, the residents of the Thomas Mann House can now also sit and rest on furniture from the Tauber Valley: the Lovell Easy Chair and the Boomerang Chair. Both of these armchairs come from the “Neutra by VS” collection of furniture. This collection is manufactured by VS based on designs by the Austro-American architect Richard Neutra (1892–1970). The company acquired the rights to the designs from Neutra’s son in 2012. Neutra initially created them for the production of individual pieces and small series that harmonized with the villas and estates of his Californian clients. Today, VS produces Neutra’s furniture in limited hand-crafted editions at its Tauberbischofsheim site.